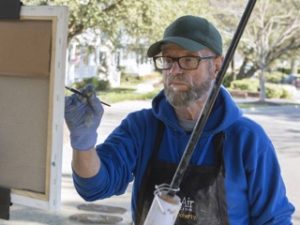 Steve Doherty was born in New Orleans, raised in Cincinnati, and educated in Illinois and New York. He currently lives with his wife, Sara, in the inspiring landscape of Virginia’s Shenandoah Valley. He graduated summa cum laude and Phi Beta Kappa from Knox College and earned a Master of Fine Art degree in printmaking from Cornell University. After teaching art in public schools, a community college, and a private college, Steve became editor of American Artist magazine. During his 31 year tenure, he launched several new art magazines, managed artist conventions, and exhibited his own artwork. In 2010 he became editor of PleinAir magazine and successfully managed that publication until his retirement in 2018. During these years, Steve also wrote a dozen books, including the new book The Art of Plein Air Painting. For more information and a review of Steve’s paintings, visit www.stevedohertyart.com.