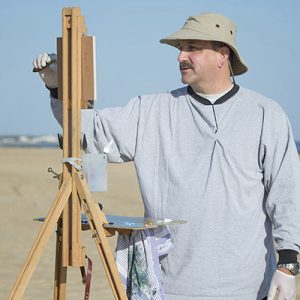 Greg Johannesen developed his interest in art at an early age, spurred on by an
art award he won at age 6. Greg was born in 1966 in Portsmouth, VA and grew up in Virginia Beach. Having grown up at the beach, the outdoors and nature have always been a major part of his art experience—drawing animals and beach scenes. After grade school, Greg had the honor to study under accomplished artist Suzanne Stevens, where he first experienced painting en plein air.

In college, Greg followed his passion for art. He earned an AAS degree from Tidewater Community College for Advertising Design with a minor in Drawing.
He then attended Virginia Commonwealth University where he earned a BFA in Illustration. Since college, he has had a successful career in the communications field for nearly three decades. He has designed and illustrated numerous books, and designed hundreds of print materials. Greg was trained as an illustrator but has retained the soul of a fine artist, always allowing himself the freedom and time to paint.

He lives in Southern Maryland with his wife, a master public school art teacher, and their two amazingly creative children. In 2006, he opened his own studio and is currently working as a full-time illustrator, graphic designer, and painter. As a fine artist, Greg has returned to one of his earliest influences, nature. His work is influenced by the Chesapeake Bay region — from Annapolis to Solomons Island to Point Lookout where work boats, boat yards, waterways, and grand bay vistas provide ample inspiration for his paintings. Greg currently paints with pastels and oils. He is a signature member of the Maryland Pastel Society, an artist member with the Mid-Atlantic Plein Air Painters Association, and an associate member with the Pastel Society of America.