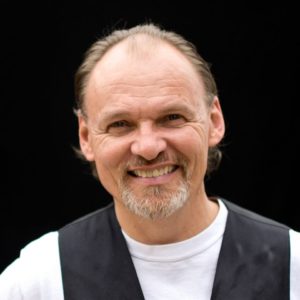 If you combine three parts painter, two and a half parts musician, a pound or two of inventor, and a heaping tablespoon of show-off . . . you just might come up with a Dan Nelson, Art Adventurer Extraordinaire. “I’ve always had a hard time playing by the rules” Dan says of his career. “If there is a conventional and well-worn path in the art business . . . you’ll have to look for me somewhere else.” Dan made his living for decades as a freelance illustrator, winning competitions in everything from street painting to sand sculpture. At the same time he began mesmerizing audiences by producing 8-by-10-foot masterpieces in the streets and parks of Raleigh, North Carolina, his hometown. Besides setting up his plein air easel anywhere from California to Cote d' Azure, Dan spends much of his time doing Live Art Performances in cities large and small, painting at festivals, concerts, and fund-raisers.